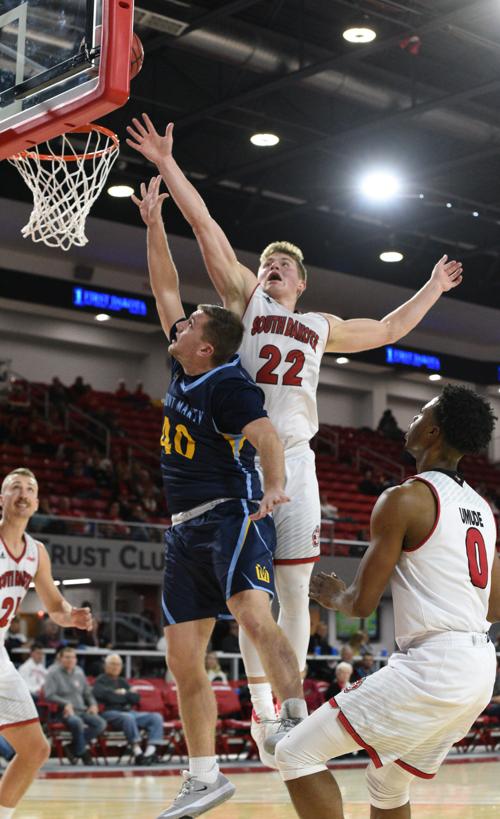 One of the great aspects of playing NAIA athletics, is that you will see a lot of student-athletes who participate in many extra-curricular activities. For a guy like Keegan Savary, a Senior Accounting Major from Sergeant Bluff, IA,  attending Mount Marty University has given him the chance to be part of the Catholic Leadership group on campus. One of the many things they do is to help provide meals to the less fortunate during the Holiday seasons.  The group also picks up trash alongside the highways in Yankton, South Dakota. Being apart of these groups allows NAIA student-athletes to create relationships with people outside of their own sports teams. These groups do a lot of good within their own communities, and allow the students the ability to grow as individuals, while learning to care for others. Attending Mount Marty has helped Keegan grow in his faith, and has allowed him to grow relationships all around campus and within the Yankton community.

While Keegan may be a great kid off the court, he plays with a lot of toughness and grit that makes him the ultimate glue guy for Head Coach Todd Lorensen and the Mount Marty Lancers. Mount Marty, in Coach Lorensen’s first season, was quite the surprise team in the Great Plains Athletic Conference (GPAC) last season. The Lancers were a 20 win team, and after winning three straight games over NAIA DII Top 25 teams, the Lancers found themselves inside the Top 25 for the next 10 weeks. They played a unique, uptempo style of play that caused a lot of chaos for opposing teams. The Lancers were also able to get their first postseason win since the 2005-2006 season. The Lancers had the dynamic scorers in place with Chris King and Colby Johnson, but it was the toughness and unselfishness of Keegan Savary that helped guide the Lancers to a winning season. That toughness allowed Keegan to start 31 games as a Lancer, and even though he wasn’t called upon to score a lot this season, he still showed up big when needed. Keegan ended the season with five double-figure scoring games, including his season high of 19 points against Jamestown (ND) in a tough 94-82 GPAC road loss. He also dropped 15 points in a 107-105 win over Hastings (NE) early in the season. It was that win, at the end of November, that started a big seven game win streak. Including three straight Top 25 wins as they beat #16 Jamestown (ND), #20 Saint Ambrose (IA), and then went to #6 Dakota Wesleyan and got a HUGE win in the World’s Only Corn Palace. Which is one of the toughest places to get a road win in the entire NAIA.

While the Lancers fell short of qualifying for the NAIA DII National Tournament, it was quite the turnaround in one season for the new look Lancer squad. Keegan stayed at Mount Mercy through the coaching change, and was happy that assistant coach Dan Tharp was retained by new Head Coach Todd Lorensen. Keegan loves Mount Marty University, and the friendships and bonds he has at the University. A coaching change can lead to a lot of unknowns for a player, but Keegan was the perfect fit for the 2019-2020 Lancer team. He didn’t get his chance to play a whole lot in his first two seasons as a Lancer, but he made his Junior year count. Keegan knows that the GPAC is one of the best leagues in the country, and that experience will be beneficial to the Lancers once again in the 2020-2021 season. He loves playing for Coach Lorensen and his staff, and the style of play they played last season. He loves that the staff cares about their players both on and off the floor, and wants them to become better men off the floor, as much as better players on it. The GPAC will no doubt be a grind once again this season, and Keegan and the Lancers will look to take the next step up, as they look to compete for a GPAC Championship!